Skip to content
HomePosts tagged 'Make your own board game'

Now… The totally unexpected and unanticipated game! That thing that no one has been waiting for! A look at the obscurest game of all…

Also widely known as that game I just made up that’s actually quite good, or so I think!

So one day I’m sitting there and I’m like “I should develop a board game” so I go and create a terribly complicated game about super heroes… Then a year later I come up with Breach the Keep after saying to my sister “we should develop our own board game!”. The initial idea was for the board, I thought it would be good to have a basic strategy game that did’t move in squares, so I came up with the idea of intersecting Octagons, Hexagons and Squares and drew this:

What I was going to use it for exactly hadn’t yet come to me, all I thought was that the octagons and squares had to mean something different to the hexagons. So (naturally) I started thinking about war… Most strategy games seem to be based in some form or other on the idea of war. I started thinking about medieval war and how you had to advance step by step, taking your enemies castles and burning their villages (yeah not pretty but it was war). So I thought, what if the octagons where castles and you had to make your way down the board taking them as you go and holding them against your enemy and thus the initial idea was born.

Next I had to establish rules to the game, I had to work out how it should work and decide upon an objective. First I thought what if you just had to take all the other pieces? But then that seemed stupid, they (I have no idea who) always say the mark of a bad chess player is one who has to take all their opponents pieces before they can put them in check mate. So I thought what if, like chess, you had to capture their king? Then he could be in your Home Keep that, if breached, meant you lost. This seemed like a good idea so I went with it. We then had to test play (a LOT) to figure out how movement would work and how taking and breaching would work.

So test play ensued, using pieces borrowed from other games to try to figure out how many pieces were good, how much they could move, how they could move etc. This was a long and depressing process of trying out almost everything we could think of and debating if certain things worked or not. I won’t go in to detail here or you’ll get bored and if you’re still reading at this point you’re probably already bored enough. So in super short detail we came up with some great ideas for combining pieces so they could move further to make them more powerful and so great ideas to balance the breaching of a keep against the defense of it. We also decided that the board was too small so I created this one:

Which is still underdevelopment in a aesthetic sense but after much more trial playing we were rather happy with: 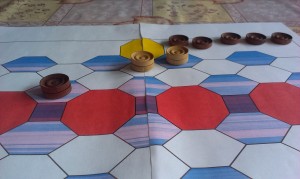 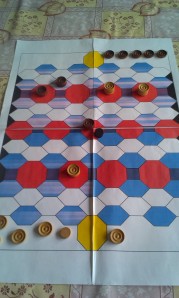 So i started thinking what to do with it next. Obviously I wanted a real copy of it rather than something printed on A4 paper taped together and stealing other board game pieces to play. Additionally I needed it to be tested by a wider audience so I thought “why not start a blog and offer up ten free copies once you’re ready in exchange for feedback to see if it’s actually a terrible game and you’re just blinded by your own delusions!” and so here we are. However the game is still under development, the board is being made to look pretty, I’m busy creating box art and pop out pieces that can be used with the game when its distributed. Additionally we’re trying to make the rules as understandable as possible (I often complain about ambiguity in other rules so I’m trying to make these as good as possible, unfortunately, and as you might be able to tell, writing’s not exactly my forte).

So hopefully the game will be ready in around one – two months and will be shipped to the first ten people who send their address to the given email free of any charge on the condition you give feedback and tell me what can be made better and what you would have done differently. Now you’re thinking “Damn it now I have to keep checking this thing before I can get free stuff… But I want free stuff NOW!”. Well tough! Patience is a virtue, well actually Aristotle wrote about Temperance rather than patience but it could be understood as the same thing… Anyway this is a board game blog not a philosophy blog… Although I should start one of those too because philosophy is the birth of all knowledge and knowledge is POWER!