Blokus – and after spending the day with my father told me I was a chip off the ol’ block!

Blokus is a great game that relies on simple rules. Each player chooses a colour and takes all the tiles of that colour. Then, starting with the oldest player they place one tile, starting from the corner nearest where they’re sitting. You can place whichever tile you like but your tiles must all be connected by the points of the corners.

Yes! I first played this game at Christmas and it’s good fun. It’s not particularly competitive, which makes for a relaxed game. On top of that it’s also very easy to grasp how to play. It’s such a straightforward game that Aunt Jean might even win at it, if she can stop talking about her dogs long enough to focus.

Happy Eleventh Day of Christmas! We’re nearly at the end of the Twelve Games of Christmas now and hopefully you’re  all !

If The Piece Doesn’t Fit, Get A Bigger Hammer!

Is what my mum and grandma used to say to me when I was small and doing puzzles (I love puzzles, for the record, but I wasn’t a particularly patient child) and the piece I wanted to put in a certain place didn’t fit and I’d just stubbornly push it, trying to bend it to my will. Eventually one of them would intervene though, to stop me from destroying the puzzle.
Fortunately, Blokus isn’t a puzzle in that way. But it is a rather good, simple abstract strategy game.

What’s In The Box:

Objective: To play all your tiles onto the board.

Blokus is a very straightforward game. Every player chooses a colour and takes all those pieces. Players then take it in turns to place one of their coloured pieces onto the board starting from the corner closest to them. However, pieces cannot be placed with the flat edges touching, but must be places point to point, as you can see in the picture below:

The idea is simply to manage to play all your pieces without getting blocked in by other players. With less than four players this game is very easy. Everyone usually manages to play all their tiles without any problems. However, with four people it does get more challenging, especially when you get closer to the end of the game. 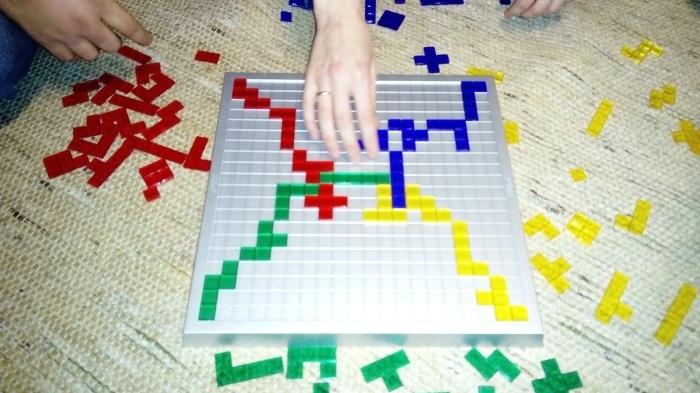 I realize that the above is a pretty bad picture, but you can clearly see that the green and blue players have managed to create a kind of blockade in the middle of the board. I don’t have a picture, but this was quite problematic for the green player later in the game as they effectively sealed themselves off from one part of the board.

This game does require you to think a few steps ahead, as the further into the game you get, the harder to have to think about where you’re putting your pieces, and which way around is the best to place them. In my opinion the best strategy is to get rid of the biggest, most awkward-shaped pieces as quickly as possible, as these are the pieces that will really be difficult to get rid of when the board is fuller. On top of that if you can manage to get through to every section of the board then you’re doing very well. The more places you can reach, the more likely you are to be able to put down every tile. The best way to develop a tactic for this game is to just go for it. Play, watch your opponents, and give a reasonable amount of consideration to each of your moves.

It is possible for every player to win this game, so it may not be as appealing to some people, but to be honest I consider it more of a personal challenge to get all my pieces down. However, if no player is able to lay all their tiles then the player with the fewest squares (once counted up from their remaining pieces) left not on the board is declared the winner.

I rated the game 4.5 because although it’s very well thought-out and easy to understand and play, I think the 3/2- player variations are too easy. If I were developing the game I would add some kind of additional “2-3 Player Challenge!” to the game, so that it could be played in the original form, or with, for instance, white tiles randomly placed around the board in a few places that add an extra dimension of challenge to the game. Something like that. It seems to me that there’s room for improvement.
Having said that, I recommend this game. It’s quick, it’s easy, it’s good, old-fashioned fun!