I have to say I’m quite pleased that I actually managed to get up the Mysterium post last month (even if I was cutting it a little fine in terms of date!). Summer is always a difficult time when one is busy playing in the sun and having holidays, so I feel like maybe I’m off to a good start.

So in keeping with that I’ll now announce the game for this month – Dragonology: The Game.

This is a bit more of a kids game than our last posts, but is nonetheless a really fun one. Hopefully you’ll enjoy the upcoming review!

Where Did The Game Come From?

Well, we’re going to make a version of Snakes and Ladders. For anyone who doesn’t know, Snakes and Ladders is originally an Ancient Indian game, played entirely by luck. Historically it had its roots in morality; your progress up the board represented a life journey with the complications of virtue (ladders) and vice (snakes). Nowadays it is most commonly played as a simple race and counting game for younger children.

What Will You Need?

We’re now almost finished with the first stage of the game! The last thing to do is to draw on your snakes and your ladders, you should aim to have these fairly evenly distributed across the board, their lengths are totally up to you, but I would advise making all of them different lengths, and including at least one pretty long ladder, as well as a nasty snake quite close to the end of the game, if you’re feeling mean.

*NOTE! Everything up to this point should be done in pencil, as mistakes are easy to make, but hard to correct if the work was done in pen.*

Here’s where your coloured pens/pencils come in. When I did it I went over all the grid lines and numbers with my black pen and then proceeded to colour in the ladders and snakes giving them black outlines, but more colourful insides. You should also feel totally free to doodle on the blank paper outside of the grid, this is your project and you’re completely free to make it complicated or simple – as you choose!

If you’ve got little kids you could also draw and number the grids yourself, going over them in black pen, and then give it to your kid (or make multiple copies if you have more than one child) and let them draw on their own snakes and ladders. 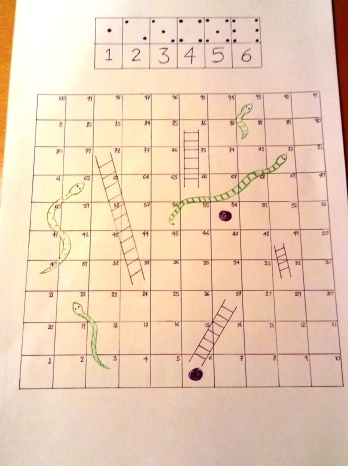 As you can see, my final products were pretty simple, but you can do whatever you want with yours! All you need now is a standard 6-sided die and a few generic coloured playing pieces and you’re ready to roll!

These posts are entirely non-profit, the idea behind them being to suggest creative ways that bring assorted games into the house if you don’t have the money/space to buy beautiful wooden, or printed copies. The games I intend to write about are all old and in public domain.

This game is very simple. One player makes a code using the coloured pegs provided and then hides it whilst the other player looks away/puts their face in a cushion. The second player then has to use the remaining coloured pegs to try and guess the code. The first player indicates when they are right or wrong using white and red pegs. The second player has to crack the code before they run out of lines. We already wrote a full review post of this game here if you want to read more about it.

Definitely! This game is a fun quickie for two players, and fantastic for keeping the most rambunctious children occupied for a little while if you’re a family that been blessed with children with boundless energy! Although a two player game doesn’t sound the best for Christmas, when there’s usually vastly more than two people around it’s actually fantastic. Both for smaller families and big ones. It’s easy to make a Mastermind tournament if you have lots of interested people or, if there’s only a few of you it’s ideal for having a few quiet moments. It’ll also keep Aunt Jean happy – she’s not strong with tactical games, but if only two people are playing it at least there should be someone left to hear about her newest animal acquisition!

Happy Twelfth Day of Christmas! This brings us to the end of the Christmas period, and the end of this series of posts – at least until next year!

Blokus – and after spending the day with my father told me I was a chip off the ol’ block!

Blokus is a great game that relies on simple rules. Each player chooses a colour and takes all the tiles of that colour. Then, starting with the oldest player they place one tile, starting from the corner nearest where they’re sitting. You can place whichever tile you like but your tiles must all be connected by the points of the corners.

Yes! I first played this game at Christmas and it’s good fun. It’s not particularly competitive, which makes for a relaxed game. On top of that it’s also very easy to grasp how to play. It’s such a straightforward game that Aunt Jean might even win at it, if she can stop talking about her dogs long enough to focus.

Happy Eleventh Day of Christmas! We’re nearly at the end of the Twelve Games of Christmas now and hopefully you’re  all !

Sphinx! And asked if I knew the answer to the riddle…

Sphinx is a great kids game which takes half an hour or less to play. Each player starts on the same square in the maze and moves around by rolling three dice. There are two symbols on the board, one is a little coloured card, called a Sphinx card, the other is a mummy hand. The Sphinx card allows you to collect a card of that colour from the stack next to the board, you need these to win the game. The mummy hand allows you to look at the colour of the base of one of the six Sphinxes on the board. There are three Sphinxes in the center of the board, guarding the treasure, there are also three Sphinxes down the right-hand side of the board. Each of these has a different colour on their base. To win the game a player must advance to the middle of the maze and present the correct coloured Sphinx cards in the correct order to reach the treasure. There is a double snake symbol on one of the dice. this means that the player who rolled that symbol must swap one of the Sphinxes in the center of the board with one on the side. In doing this the pattern of colours in the center also changes. The game is won when a player correctly guesses the colour pattern of the center of the board with the correct Sphinx cards.

Yup! It’s a slightly more challenging game for kids who are a little older. It’s a great introduction to strategy and memory games and can be used as a learning point for the myth and history of the Sphinx (if you’re into that kind of stuff). It could also be an excellent opportunity for the kids to teach Aunt Jean something, as we all know that her interest into history doesn’t extend further than the pedigree of her favourite dog!

Happy Tenth Day of Christmas, if you’re being bored by these posts, just hang on for two more days, and then everything goes back to normal on the blog!

Connect 4, and proceeded to bore me, explaining how if he started first he could always win…

Connect 4 is a simple tactical game; two players take it in turns to drop their coloured counters down columns on an empty grid in an attempt to make a line of four of their colour, either vertically, horizontally or diagonally, whilst preventing their opponent from making one first. The first player to make a line immediately wins. If both players run out of counters and no one has a line the game is a draw.

I think it’s a good quick game for when you need five minutes to chill away from the masses, or for when you need your kids to stop running around for a few minutes so that you can get food out of the oven without falling over them. You could also get Aunt Jean to play it, which would keep her out of the way for a few minutes when you’re busy, because she’s really not as helpful in the kitchen as she thinks she is!

Happy Ninth Day of Christmas everyone! If you haven’t played any games yet, you’re not doing Christmas right!

Uno, and said in hushed tones that it’s the only child-friendly way of playing Blackjack early in the day…

The deck of cards is shuffled, and seven cards are dealt to each player, the remaining cards are placed face-down in the middle of the table and the top one turned over and placed next to it. Generally the youngest player begins and they start by putting a card on top of the face-up one that matches either the colour or the number of the card. If they aren’t able to do this, but they hold a wild card, they can play that instead and change the colour of the cards that are being played. There are a few other cards that change the direction of play and similar things, but those can mostly only be played when they match the colour. The objective of the game is to play all of your cards. If you are unable to play a card on your turn you must pick one up from the face-down pile and add it to your hand. When you only have one card left you have to say “UNO!!” as loudly as possible before you can put it down. If you play your last card without proclaiming Uno, you must draw new cards and continue playing as a punishment.

Yes! Definitely! This game is great for large or small groups of players, and is all-ages inclusive. Aunt Jean could almost definitely grasp this one without too much trouble, and she might not even complain about it! On top of that, it’s a speedy play, so a good time filler.

Tame The Board Game
Blog at WordPress.com.